I am not a foodie by any means, but I enjoyed this talk at last night's CalHort meeting very much. My notes below are cribbed from Middlebrook's talk and her slide presentation, somewhat reorganized for a blog post. I cannot vouch for any of her claims or statistics. If these things intrigue you, it is for you to do further research.

Based in San Jose, Alrie Middlebrook designs gardens with California-native plants, 400 of them so far, and wrote an excellent book on that subject with her mentor, Glenn Keator. They taught the garden design class Natives in Style at the San Francisco Botanical Garden together for 12 years. More important than designing a garden she said, is stewarding it. I loved her immediately.

Middlebrook came to gardening with a background in art. She considered herself "an artist who was interested in plants." Keator ignited her passion for natives after she'd passed through other phases in gardening--tropical, Mediterranean, et cetera. She learned about plants in the natural landscape on botanizing excursions with Keator, who learned from Wayne Roderick, who learned from Lester Rowntree.

Middlebrook believes you can teach people to love native flora by teaching about it as food. California has 6000 native plants. 1500 are garden-worthy and 1000 are edible. Middlebrook says, "If you garden, you have to get involved with food at some point."

She called the native edible food movement the next big thing, citing the examples of leading restaurants like Copenhagen's Noma, which was recently voted the world's best restaurant. Noma, in the words of the award committee, "is an homage to soil and sea, a reminder of the source of our food."

"Take [chef Rene’s] starter of crunchy baby carrots from the fertile Lammefjorden region of Denmark, served with edible 'soil' made from malt, hazelnuts and beer, with a cream herb emulsion beneath – you are literally eating the earth!

Great restaurants are a blend of sophisticated cooking, imaginative ideas and respect for ingredients. Noma is more than this. It’s a experience that reminds you why some restaurants deserve to be revered."

Middlebrook and her colleagues work with chefs at acclaimed local eateries like Greens, Manresa, and even the Google cafeteria to develop recipes that emphasize native ingredients. The California Native Garden Foundation offers examples of these recipes here.

Many people have written about the unsustainability of our current system of food production--the reliance on petroleum-based pesticides and fertilizers, the risks of monoculture, chemical and mechanical destruction of soil tilth imposed by the large-scale cultivation of annuals. Middlebrook wants to find ways to augment our current system with native ingredients. She wants to apply modern food development and preparation technology to the edible plants that already grow naturally without any human assistance. She encouraged us to consider the potential benefits of replacing just 10% of our gluten-based flour supply with acorn flour. Oak trees grow without any additional water, fertilizer, pesticides, or tilling. In fact, using any of those things around an oak tree may kill it.

Key factors to consider when developing native plants for food : nutrient value, adaptability to modern tastes, the potential to grow plants as agricultural food crops that can be easily, and profitably, integrated into mainstream California cuisine.

Without pretending that we can feed 37 million Californians the way the Indians ate, native Californians may nonetheless serve as a template or starting point for consideration. Middlebrook referred extensively to Kat Anderson's popular book Tending the Wild: Native American Knowledge and the Management of California's Natural Resources (which I still haven't gotten around to reading since I first heard about it over 2 years ago).

California's abundance sustained native populations estimated to range between 375,000-700,000 (some estimates as high as 2M) over a period of 12,000 years. California had the largest population of Indians anywhere in the Americas, due to the abundance and diversity of food. (Note: I think we also have to give props to the human-friendly weather. Where else would people choose to live without furnaces or air conditioners?)

Native Californians and the Spanish explorers had the same life expectancy when the two met --about 35 years. But the natives apparently had healthier teeth and skin!

The native diet consisted of 1000 different foods, 60-70% which was plant-based. (In comparison, Americans today eat about 40 plants.) They relied heavily on acorns and pine nuts and used fire extensively to manage fertile grasslands of the Central Valley to produce abundant edible seeds and bulbs. Because they burned instead of tilled, European settlers viewed the Indians as lazy.

There were 100 tribes in California, each with its own language. They traded amongst themselves. For example, coastal Indians traded fish for agave sugars from the Indians in the desert.

California can be divided into five ecologies with the edible plants that grow in them.

Mesquite makes a sweet-tasting flour that is 20% protein, low in carbohydrates and fat. Mesquite seed pods are 40% protein and high in minerals. A mesquite stand produces as much food as a wheat field, without irrigation, cultivation, or chemical support.

America gets its pine nuts from Korea and China. Not even Italy! Meanwhile, we have pine trees everywhere.

Agave syrup is already in popular use. We import it from Mexico although agaves grow freely here.

Opuntia paddles and flowers are both sweet and high in vitamin C. Roast the flowers.

Nettles are 10% protein, more than any vegetable, also high in minerals and vitamins B and C. They substitute for any green. I know I've seen nettles on the menus of many restaurants in the last few years. And I'm a huge fan of this American woman and travel/food writer/journalist from Los Angeles who lives in rural France now with her husband and daughter and posts updates on Flickr as These Days in French Life about her "slow life" endeavor. They grow their own food or find it growing in the countryside, salvage and/or barter for almost everything they need to live with. Anyway, she's forever wild-collecting nettles for dinner and doing interesting things with nettles, including making nettle lasagna.

Elderberry is an ancient plant, the flowers and berries of which Europeans have been eating in different ways for millennia.

Ribes aureum has the best flavor the California currants.

Mushrooms can be grown year round in northern California. Some people are looking at ways to replace meat protein with more nutritive mushroom protein. MykoWeb has recipes.

Acorns provide more food for more animals than any other tree, ever. The oak is the universal "tree of life". Literally millions of oak trees already grow all over California, many on public land. Public lands are grazed, mined, and logged. Why not harvested for acorns? Possible uses: flour, starch, butter. (Butters from all kinds of nuts are popular right now.)

Miner's lettuce is Claytonia perfoliata, eaten by the 49ers during the Gold Rush. Seeds sprout easily. I've grown it in my garden. I haven't gotten it to naturalize yet because of my constant "editing". 37% protein, 42% carbohydrates, 13% fiber. High in calcium.

Amaranth was a huge component of native diet, until Spanish colonialists banned it because the Indians used in their spiritual rites and had associations with idolatry. (Who asked them?!)

I like the idea of eating more vegetables, nuts and seeds...but I'm not big on mushrooms, yet. Middlebrook grew up in Michigan, where her mom maintained a half-acre vegetable garden. Growing up, it was common to have 5 or 6 vegetables at the dinner table.

Another organization/website she mentioned was the Ecological Farming Association (meets at Asilomar every year).

Again, this is all about finding ways to take some of the burden off the unsustainable ways we grow food now. And it's about getting started and doing experiments in the garden, and in the kitchen.

Middlebrook's colleague John Farris (spelling?) brought chia cookies for us. They were tasty (but some chocolate chips would've been welcome). I ate two. (Note: that is not my scary old man hand.) 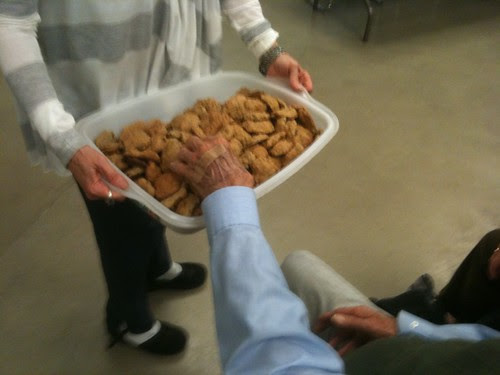 The chia that you can buy in stores is not S. columbariae, but rather S. hispanica.
For more information about chia seeds, and some recipe ideas, check out my website: www.chiativity.org