There wasn't any snow in the back 40.

I noticed the state and national media picked up, in a small way, on the story of San Francisco's recent weather. We were told to possibly expect snow at sea level, which has not happened here since 1976. Well, in case you were wondering, it did not happen where I am although there were some reports of light snow at some of San Francisco's higher elevations.

There has, however, been lots of storminess and drama in our skies. I took this picture Thursday morning during one of my currently very rare study breaks in which I leave the house. 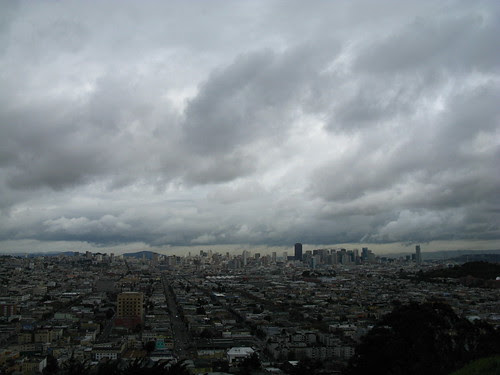 It started to rain shortly afterwards.

Fortunately, this quarter is almost over and before spring quarter begins, I will be taking a week-long road trip up the coast, all the way to Seattle. I should come back with lots of bloggy bits as I will be stopping to see the sights in many places.
Posted by chuck b. at 4:32 PM 8 comments:

As busy and preoccupied as I am with school, it would be garden blogger malpractice not to get a post up during all this warm weather we've been having. I could see the cherry trees leafing out from the upstairs window. When I got down to the garden I found roses, blueberries, Japanese maples, and clematis all leafing out as well. And everyone was thirsty so I watered.

This was neat to see: the first buds of Fuchsia boliviana 'Rubra', which I started from seed a few years ago. These fuchsias take a couple years to start flowering, but once they start they never stop. 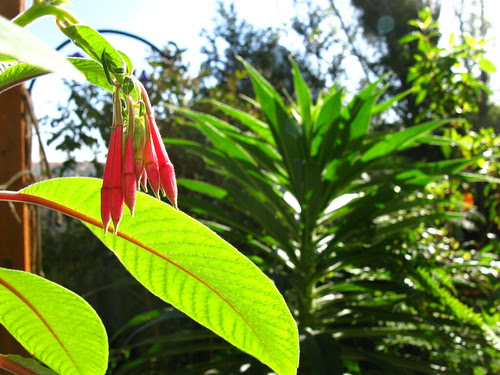 You could get one from Annie's Annuals if you don't have time for seeds.

Nearby, Fuchsia fulgens is sending up vigorous new growth from the crown. I'm going this opportunity to back back the single, gangly woody trunk bearing all these flowers. But not today. 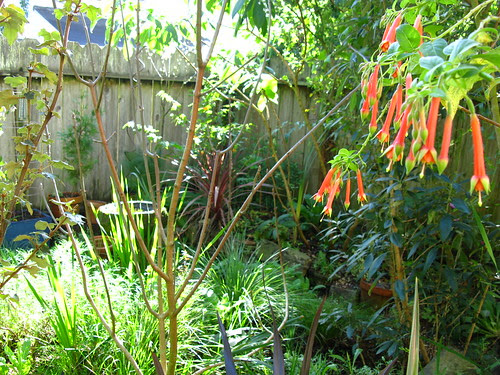 As you can see in that picture, the buckeye (Aesculus californica) has not broken dormancy. It's usually one of the first plants to do that this time of year.

Backing up a bit, I can show you the Beschorneria attaining massive proportions. These plants flower more freely than agaves, and the flowers, while not as rigidly upright, are equally fabulous. I don't know when that's going to happen; I see no sign of an inflorescence. 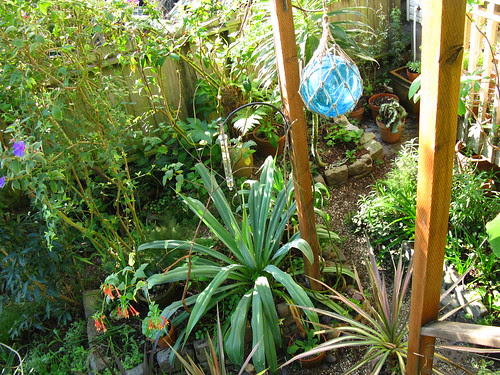 Cobaea scandens seeds, dropped from the once enormous vine that I cut all the way back, have germinated under the Beschorneria leaves. You can see a few seedlings in this picture if you know what to look for. That's good and bad. I do love those prolific cup-and-saucer flowers, but the vine itself is a bit rampant for the small space. Judging by previous experience with seed-grown Cobaea scandens, I have until 2012 before I'll have to deal with it. 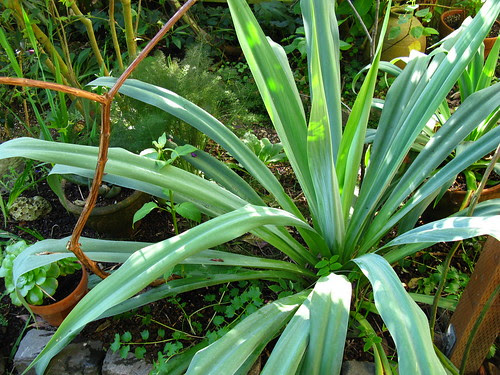 I have a second Beschorneria growing in a medium-sized terracotta pot. I don't how sustainable that is for the plant...but it looks fine, doesn't it? It was growing in a much larger container on the front steps, but Guy hated it (said it was a depressing sight to come home to at the end of the day!) so I moved it. Anyway, the tall, leaning Echium pininana is the main thing to see in this picture. I'm afraid I'm going to have to cut it down because it's getting too hard to walk by. I grew a few of these from seed. They shot up fast and haven't flowered. That's fine, but I cannot have them blocking the paths, which are already crowded because the garden is so absurdly over-planted. 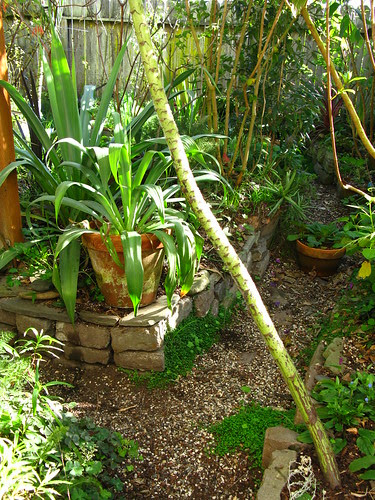 When we try to sell the house in a few years (the current plan), I'm guessing I'll have to take out 50% of the garden. We'll cross that bridge when we come to it, but I'm guessing the lemon will stay. From the perspective of re-sale value, an established Meyer lemon is surely an asset. Hopefully, when it's time to go on the market, I won't be having problems with whatever creature is eating the lemons right off the tree! 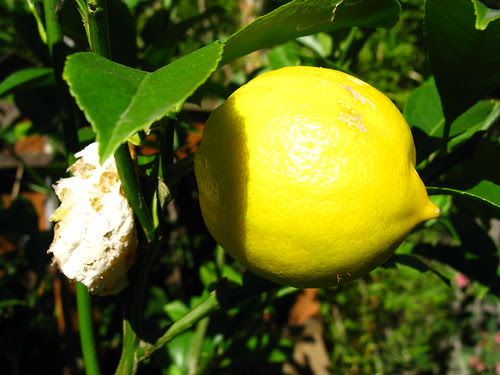 That's an eaten-lemon on the left. What eats lemons?! Oy.

I can't even resort to my usual complaints about my neighbor harboring rodent-pests in his neglected, overgrown bamboo forest next door, because he cut it down and so far it has not re-grown.

The pest problems are real. I don't know what's going to happen when the blueberries, strawberries and raspberries begin to bear. Will I get to have any? Besides eating fruit, the varmint has some unerring sense for locating bulbs. I'm guessing I've lost any/all tulips and lilies, including every potted specimen, as evidenced by massive digging destruction and overturned pots. Upstairs, I've resorted to bringing the pots in at night so he can't get at them. Happily, the poisonous daffodil bulbs have all been left alone. We'll have those to enjoy soon.

Ceanothus is coming into bloom, but I couldn't get any good pictures of it. Here is the princess plant instead (Tibouchina urvilleana). For many years this seemed like the iconic San Francisco garden plant, and they were really everywhere. I don't know...it feels like I don't see them as much as I used to. 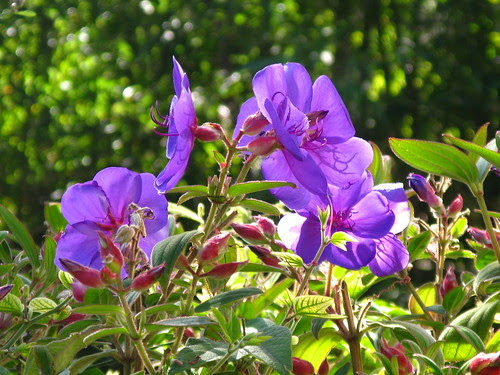 They have not become rare by any means, but it seems like I can walk a few blocks without seeing one now, which was not always the case. 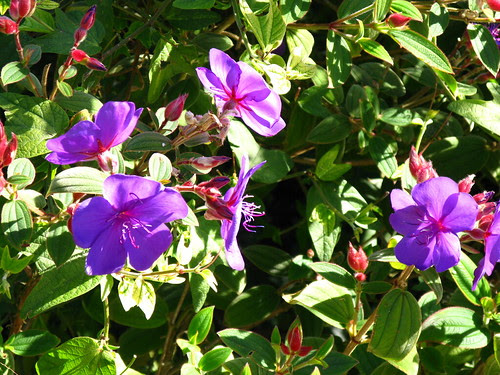 Hardenbergia violacea was late this year, but it has arrived. 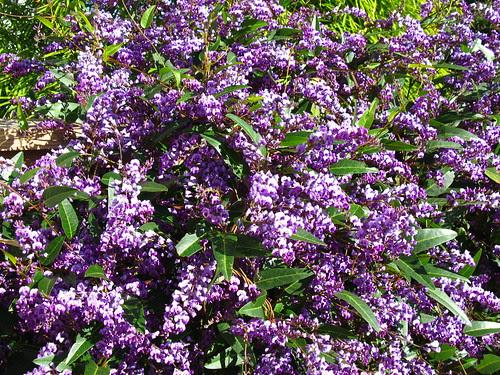 Bees are just coming out of hibernation, or whatever it is that they do, and this plant is ready for them. 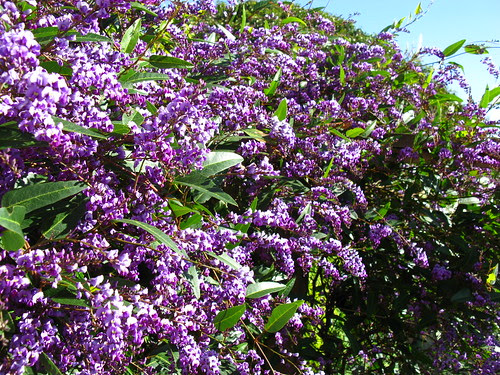 Don't become over-reliant on technology when you venture into wilderness.

Danger has long stalked those who venture into California's desert in the heat of summer. But today, with more people pouring into the region, technology and tragedy are mixing in new and unexpected ways.

"It's what I'm beginning to call death by GPS," said Death Valley wilderness coordinator Charlie Callagan. "People are renting vehicles with GPS and they have no idea how it works and they are willing to trust the GPS to lead them into the middle of nowhere."

"It's important for people to know that only a tiny portion of Death Valley has cell phone reception," search and rescue coordinator Micah Alley wrote in an e-mail. "GPS units are not only fallible but send people across the desert where no road exists."

Over the past 15 years, at least a dozen people have died in Death Valley from heat-related illnesses, and many others have come close. Another hiker vanished last June in Joshua Tree National Park. His body has not yet been found.

These are not just stories of unimaginable suffering. They are reminders that even with a growing suite of digital devices at our side, technology cannot guarantee survival in the wild. Worse, it is giving many a false sense of security and luring some into danger and death.

Read the whole thing. Apply any lessons learned to the wilderness of your choice. Be safe.
Posted by chuck b. at 12:31 AM 2 comments:

on a miserable night, after a grueling mid-term. 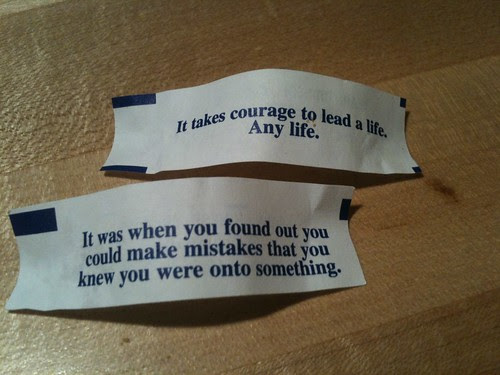