Most of the Narcissuses are quite done, but this little guy in a container on the roof always starts and finishes later than everyone else. He also has the sweetest fragrance. Maybe he's a she. 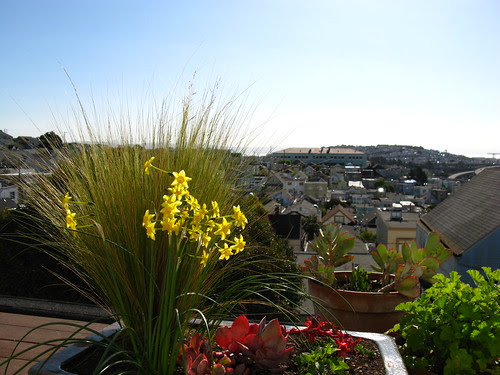 I'm really loving Tritonia crocata. Next year, it's going in the garden. 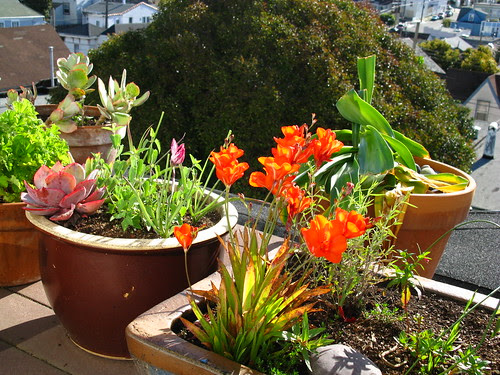 Down in the garden, Ceanothus 'Frosty Blue' 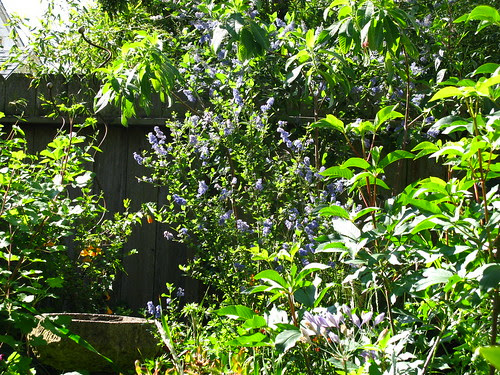 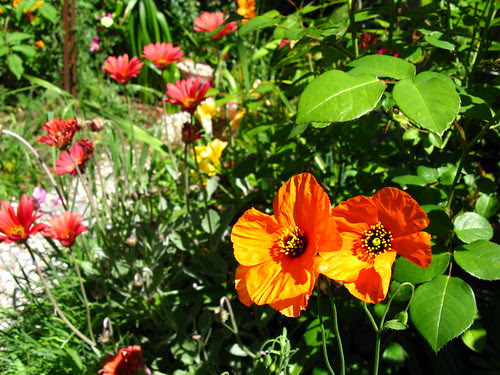 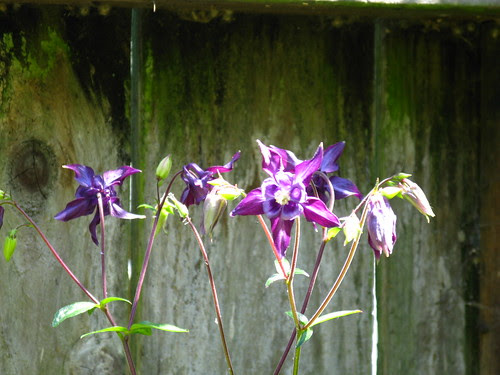 So too do these Triteleias with extra-large inflorescences. 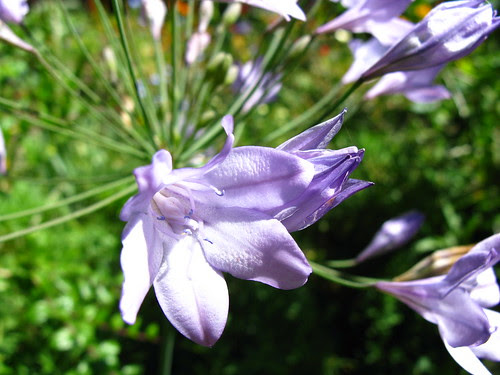 I bought five of these California natives selected by Telos. The flowers are just about done for the year. I'll try collecting some seed, but I don't know if the selection will breed true. 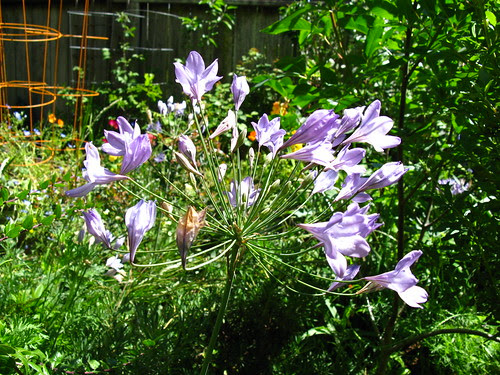 It's more of a take-what-you-can-get thing with the passionless passionvine which never has more than 2 or three flowers at any time. Sigh. 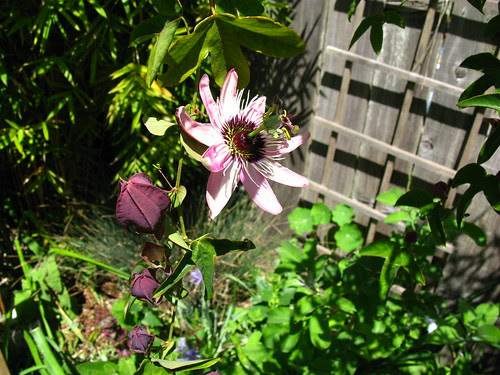 The Cuphea has passion to spare; it always has flowers. 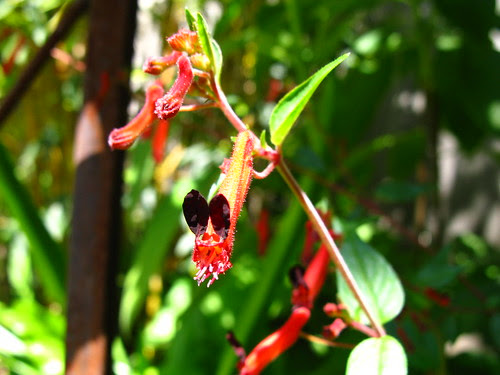 A complaint about this plant, and why not, would be its rather brittle stems that break too easily. Maybe that's a feature and not a bug, but I try to keep a safe distance. 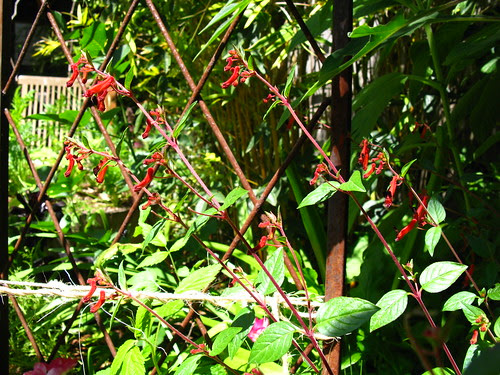 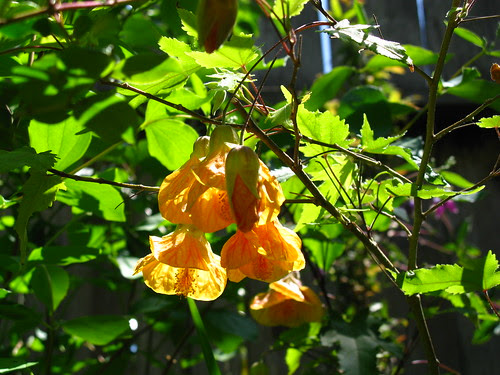 Camassia. This is a good bulb. 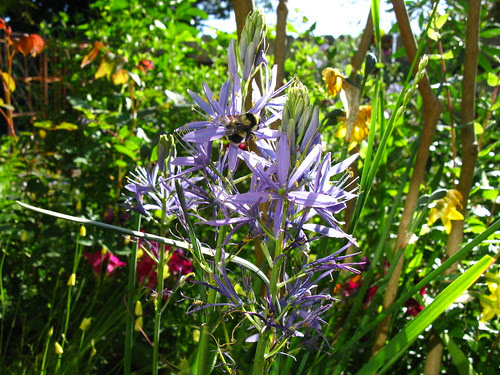 I have five or six of them and they all came back bigger and better this year, although I feel certain that I bought a pink one last year, and there has been no sign of it. 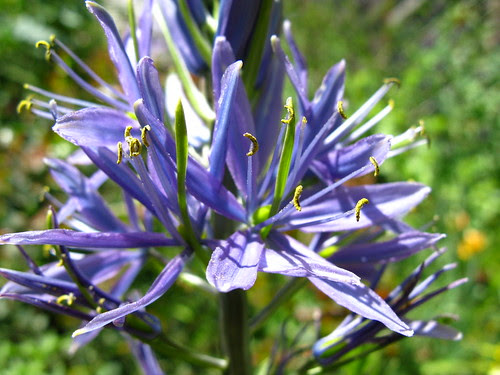 Freesia is another one that I can't get enough of. Except for the red and yellow flowering form which I yanked and composted immediately. Freesias are just about done. 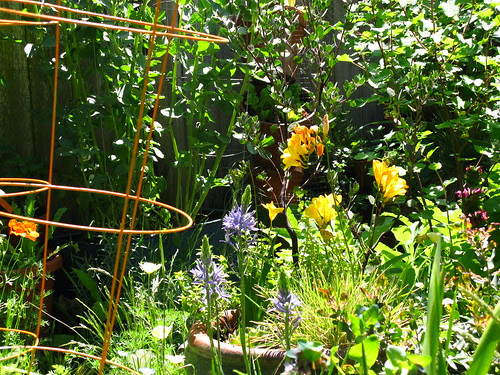 I don't have anything like the wildflower show I had last year. I'm not sure where I went wrong, but I'm not going to dwell on it either. Gilia tricolor. 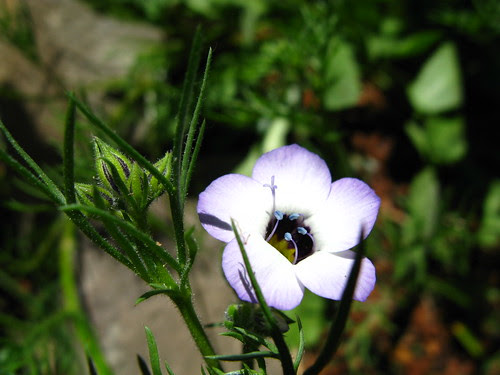 Pelargonium; a recent addition. I used to loathe "geraniums" but I've gone 180 degrees in the other direction.

Hi Chuck, you may have fewer flowers than last year, but the photos are phenomenal. That backlighting is magic. Raspberries AND broad beans? There will be food! Happy bloom day. :-)
Frances

Nice back drop to the last of your dafs! A beautiful sky view! ...camassia is a good bulb...I have planted several and they get bigger, I love the water color purple/blue that shows when you look closely. I hope you are having a great bloom day. gail

Did you paint your tomato cages?

Do you have any Seattle-area gardens you've been meaning to visit that we could go to? Right now I'm thinking Elandan Gardens, Cisco Morris's planting strip, and my friend's backyard garden.

Do you think you'll be hungry tomorrow night? We could go out for dinner at this place that I really, really love (http://www.elementalatgasworks.com/default.htm), but I normally don't go there because they don't take reservations and spaces fill early. However, it should be doable to get a table at 9:00.

Gail, that's very well put about the water color look of the Camassia--thank you.

Adriana, yeah I was inspired by this post, but knew it would be better (cheaper) to just paint the ones I already have.

I'm happy with my result, but you definitely have to choose a bright, bright color. Anything muted is totally lost in bright sunshine.

Julie, Our comments passed on the [information super-]highway.

Those gardens sound great, and that restaurant sounds great. I will definitely be hungry. I am always hungry.

I hope you're not feeling any insecurity about entertaining me... We could sit and watch Teletubbies with Sylvie all day, and I would be happy.

The purple columbine is just gorgeous. I just planted camassia last fall and it is blooming. I was so excited to see it.

Wow, spring sure looks different in California. I love the Triteleias, which I had never seen before.

That sure seems like a lot to me!! I love the abutilon, the color is really pretty.

The columbine is beautiful, and this is the second blog I've seen today with camassia pictured--I'd never heard of this before, but I'm certainly going to look this one up!
This is a feast for the eyes of this poor Midwesterner who is still trying to coax some daffodils into blooming:)

It looks like a lot of blooms to me and they do look so nice with the backlighting. Passion can sometimes be a bit fitful can't it?

We have the Camassia and Brodiaea, Triteleia's relation. Much later blooming here of course. In all my years in Hawaii, I never saw a Passion Vine put on a real show of flowers. I don't think they do that. You just need to obsess over each individual flower.

A roof top garden....how lucky you are. I really like that photo. It was a very pleasant tour of your "down on the ground" garden. Especially enjoyed the Gilia tricolor.

Your plants have a great view up there on the rooftop! Love that shot. What an amazing variety of blooms you have, it makes me want to put a little more effort into my flowering plants.

What Christopher said. There are buds and flowers in all stages on the passionvine, but no matter how big it gets there never seem to be that many in bloom relative to the amount of foliage.

Love the Tritonia, Chuck, and the way the little 'ears' contrast in color on your cuphea. Being so brittle was a disadvantage in a hail storm, too. Mine are regrowing but cracked off badly.

Wow, love the Stylomecon heterophylla. Haven't seen that one before. Love the shots of the Abutilon, Camassia and Gilia too.

Beautiful bloom day shots. I thought about your aversion to the McDonald's color scheme today as I was putting a ring of bright red azaleas infront of a group of golden euonymus. Not my favorite combo either, but I was trying to draw attention and get people to venture down a certain path.

You had a really nice Bloom Day! Maybe the wildflowers didn't like the spring rains...too much? I've found them to be rather fickle, often skipping a year or more depending uopn conditions. I've had wildflower seed come up 4 years after it was scattered!

I love the yellow freesia with the camassia. My camassia is up, will bloom in June.

No post in FOUR days! I hope you are ok!

I kind of forgot you had a rooftop garden, that sounds neat. And I like the lighting in your pics this month. Seems sunny, but not harsh.